Ahhh, Berrystumpytail , a bossy one 😛 . Not liked much by the Warriors Community. I looked at a poll thing and he was third in most annoying warriors.  Now for the talk.

Well, when he was kit he was cute, adventurous, (that’s how he lost his tail though.) and most important-FLUFFY!!!!!!!!!!!!!!!!!!!!!!!!!!!!!!!!!!!!!!!!!!!!!!!!!! All kits NEED to be fluffy. As an apprentice he was pretty nice, silly, daring, getting into funny little fights with other apprentices. Now for when he was a warrior, it EVEN SAID THIS N THE WARRIOR WIKI 😛 he became SUPER bossy, annoying, and VERY VERY controlling. He ordered apprentices around like slaves. Berrynose, you need to have a meeting with Lincoln about the slave thing.  😛 Hollypaw(leaf) said to Honeypaw(fern) all she can see in him is pride and scorn when Honeypaw was “mooning” over Berrynose. He is also very rude and boastful. I bet if I looked up ‘Bossy’ in a Warrior Cat Dictionary, I would see Berrynose’s name as the definition. However, he was a good father. And very insane about Poppyfrost and his kits before they were born. He’s been getting a little better though.

MOST Annoying Thing EVER…..

So, he’s a cream tabby tom with a torn ear tip and a stump for a tail. And amber eyes. He’s pretty nice looking. He looks like his mother, only one in his litter to, NOW ON TO PICTURES. A wonderful drawing of him by Starburst565.

A nice photo of him. I do not know the artist though,

Another good drawing by Zolairty 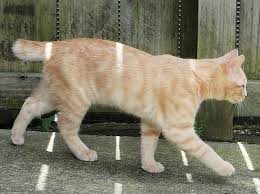